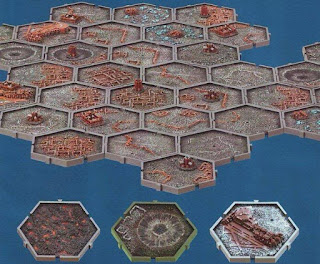 This has nothing to do with Col. Corbane's Going on Campaign blog (though it's a great site for reference material and advice, you should have a gander if you get the time), but a Planetary Empires campaign that will be taking place at the club I attend, starting 4th February. We'll have about fifteen players and it's looking to be a two-month/eight-game campaign with the one who has the most territories.

I thought I'd post up the rules ahriman sent me (he's organising it) in a preliminary format and see what you guys think of it.

Enclosed you will find the general guidelines for selecting an army and aiming it towards Glory!

All official Army Codices are accepted for use, as well as additional rules for units from the Imperial Armour books.

I'm very glad for that last rule concerning special characters, as I'll be using a Wolfwing list for this... I'm going to propose that Special Characters that were taken out of action during a game receive a 4+ roll to see if they survive their injuries and return to battle (maybe missing a game). I think this reasonable as removing a model from the board is not necessarily indicative of someone dying, just being out of the battle for the 10-20 minute duration the average game represents. (If you're reading this ahriman, and I haven't sent you the e-mail, I probably forgot... :D).

I'm also not sure on the win-loss % as a tie-breaker, due to the low(ish) number of games meaning that if you miss a week or two, you could be seriously handicapped/advantaged depending on the situation (as each game will count for quite a high percentage).

Any thoughts guys?
Posted by Itkovian at 11:29