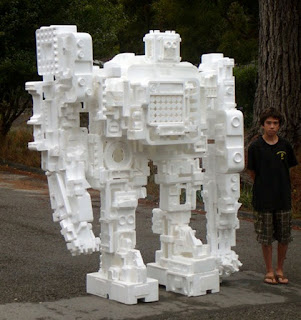 Picture from Make:Online - used without consent

So, I've been making a piece of terrain, using vac-formed plastic from Amera Plastic Mouldings over the last week for our club session tonight. The club has a scheme going where one painted piece of terrain to add to the inventory = 1 free night of gaming. I, being me, left it until the last possible minute, of course.

So, Monday night, I mounted the building on an MDF base (kindly cut by Zygx, over at 7th Day of Creation (TIP: Get a friend, or yourself, on a model-making degree - very handy... :D)). I had to add lengths of sprue to the base so as to obtain a greater contact area, then just added superglue. I also added a few brocken up blocks of expanded polystyrene to serve as rubble at the ruined end of the building. I stuck them on with superglue.

Once all that was done, I came back to it the next day (got a bit bored with it and wandered off that night...), spead a generous amount of watered PVA down on the board itself, the polystyrene (made sure I covered the whole thing) as well as selected bits of the building itself and stuck some (unused) cat litter on there. Left that for a good eight hours then came back to it and added another layer of watered PVA over the top (dabbing the brush so as not to dislodge too much of the stuff) - I literally drowned the thing, as I do with my Imperial Guard bases.

Left that until the next night, made sure it was all dry, and started priming - thinking that the two layers of PVA and the cat litter on top of the polystyrene would protect it.

When you've been spraying for a while, and just can't seem to get those white spots of white disappear, stop. PVA, it seems, doesn't seem to protect anything (at least in it's diluted form). I suspect a few more coats of PVA would have been needed to protect it from the stuff completely. Oh, and with expanded polystyrene, at least, distance from the can makes no difference...

Luckily for me, it doesn't look too bad - mainly because there is cat litter literally all over it (though it was frustrating dabbing black into all the recesses). As it stands, I've just got to drybrush the rubble area (was still waiting for the black to dry last night) with codex grey, then a lighter grey drybrush all over when I get home tonight.

All that just to save £3.50... Well at least there'll be an extra piece of terrain for the club, which is always good.

A couple of links to interesting topics related to this:

http://www.thepalantir.org/ca/terrain/azo001/azo001.htm - this article suggests the use of a sand/PVA mix, which, I would assume, would protect the foam from whatever is in the spray primer better, as well as disguise the bubble-like texture it has. He doesn't use spray primer here though. Some very nice rocks, too.

I think next time, I'll get hold of some Polyfilla (the English equivalent of Spackle, I think) and coat the blocks in that...

Oh, and a quick question: If I try and spray varnish this thing, will that melt it as well?