I've had this idea buzzing around in my head for a while now so I thought I'd stick it down on "paper" and try and give it some shape. The astute, or just generally curious, among you may have noticed that I have a second blog with absolutely nothing on it, named "The Lay of Jysh". It was created a bit prematurely, mainly to test out new blogger templated for NYD, but has been staring at me for a while now, begging for something to be done about it.

The whole point is to create a campaign setting - in a similar vein to Forge World's IA books, mainly for my friends and I, but also anyone interested in the milieu. I want the battlezone to evolve as we play games/campaigns in this context so that, in the end, we have a massive narrative that has occured as a direct consequence of our actions.

So, Jysh is an orc-infested system that caught the tail end of a Waagh about 400 years before Terran forces first came across the system (this setting is during the Great Crusade). The Waagh was broken, but so were the Jyshites, their population greatly reduced, their cities mostly destroyed and mines ransacked. Since then, the orks and the Jyshites have been competing with each other and amongst themselves for resources. Reduced to a hunter-gatherer/scavenger existence, the Jyshites are a pale shadow of their former state.

The models I'll be using for these guys will come primarily from their Feral range (I'll be stripping my Penal Legion squad as the basis for the first hunting group), but also from their Rebel range to represent them scavenging Hellebronian equipment after skirmishes and battles. 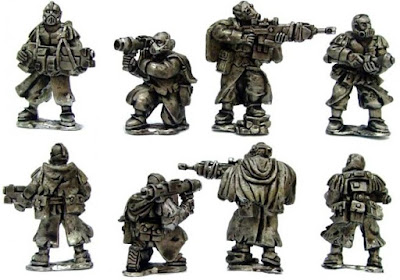 Regardless of body, they'll all be using one of the Feral heads: 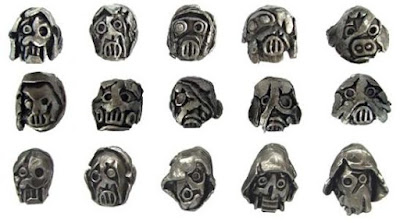 The force will be using the Imperial Guard codex, so I should be able to integrate them seemlessly into my army for bigger battles. It will of course be a more feral (sorry about the pun...) interpretation of the army list. Penal Legion for individual Kin Bands, Enginseers for Tech-Shamans, etc...

I want to include some desert-style rough riders in there, and the Tallarn Mukaali seem quite fitting - either as rough riders OR ogryns, maybe. I was wondering if anyone owns these models or has had a look at them in the flesh. If you could let me know what parts come separately on these kits, I would be very grateful.

So that's a rough outline so far. Any comments or suggestions?