Took my Morlocks down to the local club last night to pop their "game cherry" and had a good match against Friend Matt. He was using his CSM:

Lord in TDA w/4 Champion Terminators in a Land Raider

There may have been some more stuff, but I'm not sure. It was a 1500pt Annihilation game with a Pitched Battle deployment. I took everything I have made up (so five squads and two characters).

We didn't finish the game in the end - we got to Turn 4, but we had a bash at it anyway. Highlights include him shooting my first squad to land, getting three wounds and me rolling, individually, three 1s in a row... Auspicious start, but it would seem that I was just flushing out my bad luck for the rest of the game. The Mr Claws from the aforementioned squad bit the dust the next turn, but the guy with the chainfist went on to weather a round of shooting from his whole army, go all "Hulk Smash!!!" on his Land Raider (with 3 Destroyed results), then weather another round of shooting before finally being dragged down by weight of numbers in assault (there's only so many 2+ armour saves you can take before your luck runs out - my limit was nine...).

A short distance away from this, two successive waves of Daemons landed and tar-pitted one of my squads, reducing it to 2 members before they got countercharged by another squad and disappeared under a flurry of power-weapons.

Meanwhile in the centre, the Belial+Interrogator+Company Banner combo Command Squad first charged the Greater Daemon in cover. He took two wounds off the Iron Father, who managed nothing in return, before, again, a flurry of power/chainfists popped him back to where he came from. The squad thgen consolidated into cover just in time to receive charges from both the Chaos Lord and retinue as well as the Defiler.

When the dust settled from that assault, the command squad had been wiped and both the Iron Father and Santar had been reduced to a Wound a piece. However, the Chaos Lord had managed to score himself a Thunder Hammer to the face, three of the Terminators were gone and the Defiler had been reduced to scrap metal (with 3 Destroyed results) by the Chainfist guy.

MAN OF THE MATCH 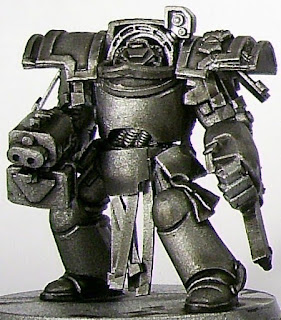 This guy really held his own - shrugging off two dozen-odd shots of various types, from Lascannons to Bolt Pistols, before carving up a Land Raider in a single round. He earned his space in the annals just for the distraction he caused...

I liked the club a lot and felt welcome there. I'll definitely be wanting to become a member at the end of the month. It'll be nice to have a regular game every week. I have one organised against my eternal nemesis army - orks next week, which should be fine - the list has the joy of nob bikerz with der warboss nd painboy... Should make it interesting at least.

So, this game is going to be 2000pts, and is kicking off a campaign using planetary empires and the veteran skill rules in the back of the rulebook. That means I have to add another 500pts to my current list, but I won't be allowed to change the list once I start it. My current list can be found here, and I was hoping for some advice on what I can expand it with. Should I just plump for two Land Raiders (and hope someone can lend me a proxy for one of them), or should I maybe take something else - I'm not necessarily going for pure-Deathwing - to even out the force?

Any advice would be greatly appreciated.