Been silent(ish) for the past three weeks but, as you'll see, I haven't been (that) idle... :D

Let's just dive right in, shall we? I give you Terminator hell (in more ways than one):

That's the full 1500pt army. The plan, for the "normal" troops was to give them a badab wash then drybrush them quick and dirty like to be ready for the Gedren Prime event this weekend. Sadly I won't be able to attend due to family issues, but the silver lining is that I can spend a bit more time on them.

I used a can of Army Painter Plate Mail primer in a bid to speed things up. It did work a treat, though for the exo-skeleton bars, I'm going to have to paint black then tin bitz over the top...

And with a heavy Badab Black wash:

I'm going to try for a high contrast look - practically pure black on the underside with a nice sheen on the top of the plates. I've never liked painting with metal beyond the whole basecoat-wash-drybrush method. Any attempts I've made before have been inferior to that effect.

And finally, we have the two characters. 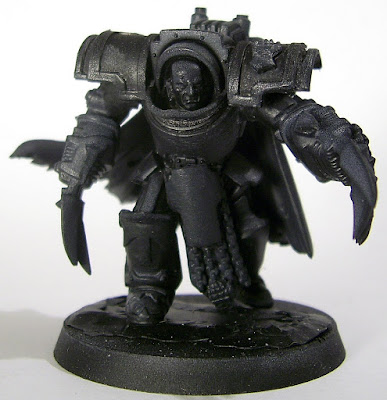 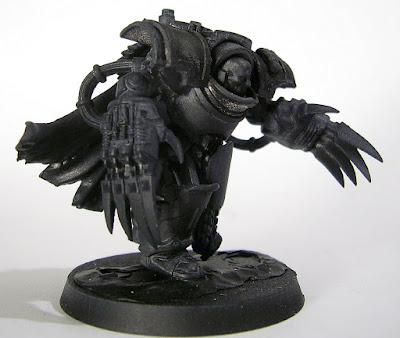 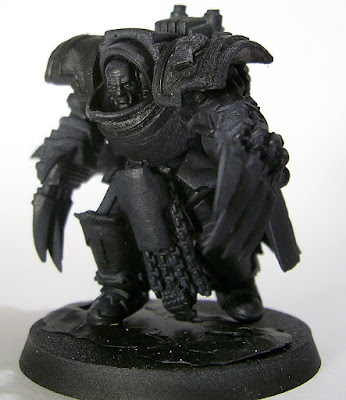 And the Iron Father: 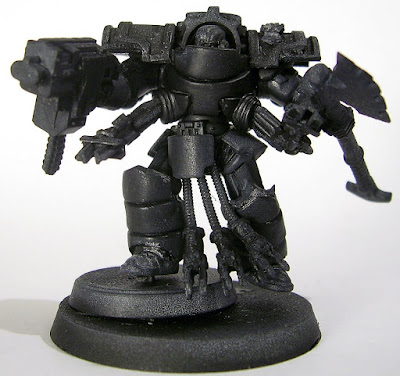 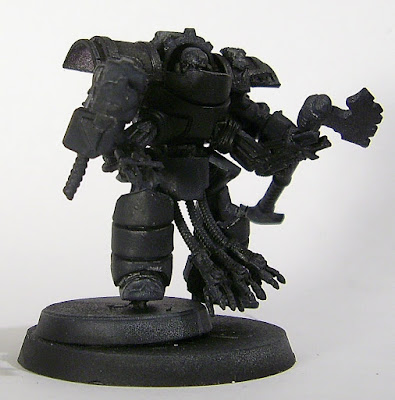 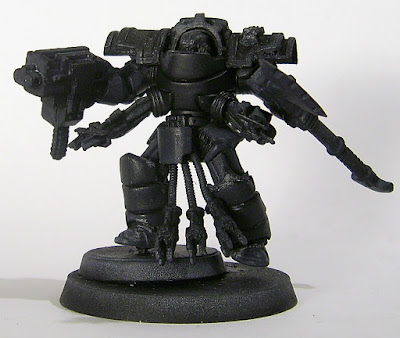 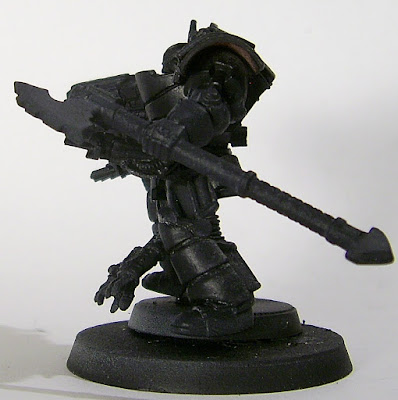 The primer on both characters was done in sub-optimal conditions (it's getting cold in blighty), and that's all they've had so far. I need to go over with a chaos black basecoat, then they're going to be painted in standard Legion colours, which should make them stand out from the rank and file nicely. They're both based on Chaos Lords with a bit of pro-create work, and I felt they both deserved a face to make the more individual as well. I'll be trying to emulate Rev from Warseer's method of painting them - no grey highlights on the armour but mithril silver "chips" on the edges of the plates. The faces will be rotting flesh highlighted up with skull white (they're blu-tacked onto the models at the moment).

The secondary arms on the Iron Father come from the Iron Brotherhood minis by Micro Art Studio and the bionic hands on the end of his mechadendrite "tabard" come from a set of conversion bits made by the Phoenix Wargamer's Club.

Oh, ignore the bases completely - they're just mountings for painting. The actual ones have jad their basecoat of tin bitz then will be getting a boltgun drybrush and a couple of washes to make the look weathered/rusty.

Let me know what you think - I kind of feel that the IFs axe is a bit plain at the moment and am considering adding a power cable for it.

Posted by Itkovian at 01:13 No comments:

Things are coming along nicely. I expect to have this ten done by the end of the weekend, hopefully, then I'm past the half-way mark. I haven't been able to do anything about the shoulderpads or colars yet because I got IDed for new hobby knife blades... ho hum. I swear I used to get IDed less when I was UNDER 18...

These are the squads as they stand this morning. I added the straps and groin plates last night (except for the first Honour Guard - I still had some work to do on him. I'm waiting until tonight to start bending the strips to give them a bit of life. I'll probably have to remove them from the bases for that. 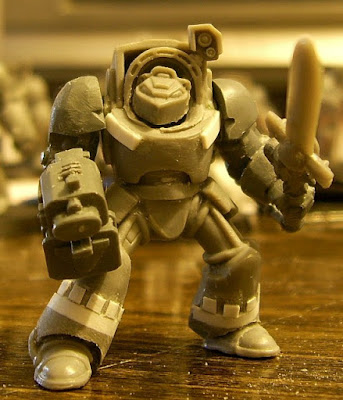 Close-up of the HG. I'm quite happy with the right-hand greave (only a tiny bit of cleaning to do on the edge) but am not so pleased with the left one. The second tooth in on the cog pattern fell off this morning, so I had to re-stick it and will have to file that down tonight. 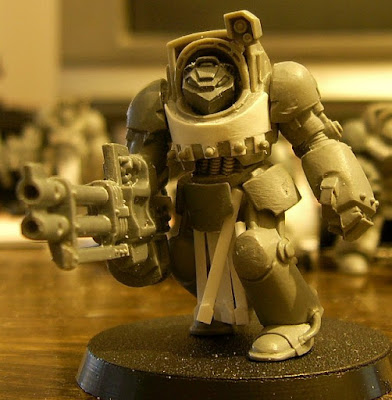 And a close-up of the rivets, done using Ithmaril's method. They need some cleaning up around the bases. I'm thinking I drilled a bit too deep into the sprue, but I think that problem can be solved when I reshape the stamp to reduce the amount of material left over around the rivet's base.

So there's light at the end of the tunnel... :D

Posted by Itkovian at 10:16 No comments: