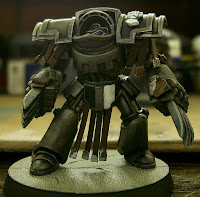 Finally regained control of my finances after a bit of fun with the fraud department at my bank, so I have a bit of a pic-heavy post here for you. It's a bit early for thoughts that are too coherent right now, so I'll get straight to the piccies and stick any comments that occur to me as I go along... :-)

First we have some better pictures of the squad that won me the squad competition over at The Great Crusade. It was a great competition with some really nice entries, especially   Pacific's World Eater Assault Squad and BIGWILL's Sons of Horus Squad led by Little Horus Aximand. I would like to thank anyone who took the time to vote in it. On to the pictures:

The power weapons were painted with asurmen blue over boltgun, but now I'm going to change them to follow Ron's Method of Space-Hulk style power weapons. 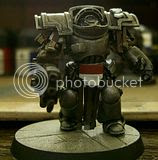 As you can see, a lot of stuff needs going over, it's painfully obvious this was a bit of a rush job... *blushes*

The next one isn't a very good picture, but I liked the effect. If I had some properly painted terrain (or photoshop skills) I could probably make it quite cool.

So that was the first squad, now for some piccies of my current progress with the next two squads:

All ten termies together. It's amazing how much space they take up on the table... Not a very well focused pic - I think you can see my DVDs better than the termies... Ho hum.

These two will be power weapon wielders, though if I'm using Tempus Fugitive Rules, they would be Primarch Honour Guard (Relic-Blade-wielding-nutters).

Two Chainfists. Converted on to have a more dynamic pose and had to use one of my old Termi heads (from the previous plastics) for the other one because heads like to run away and hide under the sofa with me...

More Claws. I'm keeping the winged skull on the right-hand guy as some kind of honour for valour or whatnot.

Two standard power fist/storm bolter guys. The power fist has since been cleaned up (it comes from a AOBR terminator).

And finally two Reapers. As you can see, they have the runaway head problem as well - I lost them within five minutes of each other...

So, I have some minor putty work and general cleaning up to be done on some of them, then I need to add plasticard detailing, the straps and shoulder plates/collars. I can't do the straps at the moment due to my running out of Microstrips of the right size (I'll be getting some more next week, when I get paid) so I'm doing some detailing now, while waiting for PVA glue to dry...

Oh, also, I finally received the rest of the army (two new termi boxes and two chaos lords) as well as my order from Dragonforge (you may be able to spy them in the background of the first group shot - they're in better focus than the models...). If not:

I have to say I don't have much love for the Royal Mail employees who are striking at the moment - every year that they do this, I lose half of my bonus because the company's income gets crippled and we don't achieve budget targets... /rant

Anyhow, yes, got my order from Dragonforge, and boy am I impressed. I'll stick a review up once I've painted them. In the meantime, you could say they are thoroughly recommended!

Oh, and you may have noticed a progress chart at the top of the main column, tracking how much of the army has been done. I think it's pretty self-explanatory and looks ok on my laptop - though my work computer doesn't seem to like it much (XP, I presume).

So I'll be off to get ready for work now. Catch you all later!
Posted by Itkovian at 07:22