Evening guys, I got Mr Versatile's shoulderpads and collar half way there last night. Thought I'd show you a few pictures: 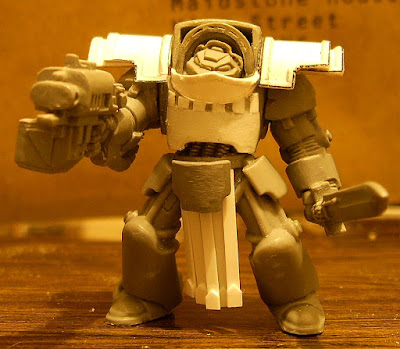 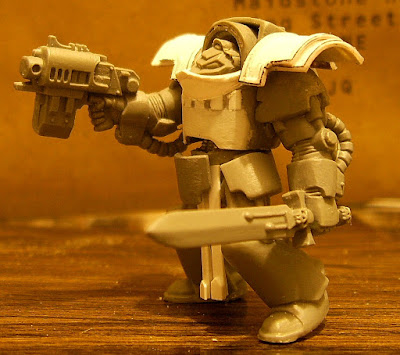 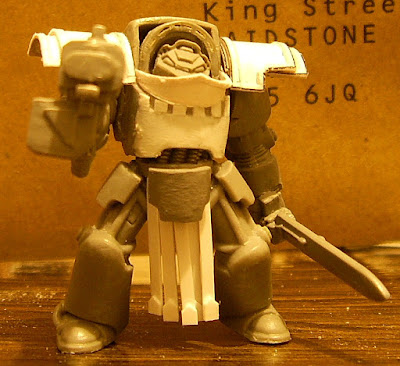 The more of these photos I take, the more I notice the horrible bits that need touching up... The pads went together ok. They need some putty work done to them, and of course, I need to add the leather straps to the shoulders.

It was a bit silly to use this one as the test model. I'd previously butchered it quite a bit for some unremembered conversion project. As such, it had no collar line, and one of the tabs on the side of the torso (which I use as a guide to attach the pads) is missing. As such, they're not exactly level. I also need to work on making sure I use the same bit of the clay shaper handle to bend them every time - these two are a bit inconsistent in that respect as well...

In other news, I received this month's money prescription today and ordered a bunch of tech-deck bases from Dragonforge, as well as the final two boxes of terminators and bits and pieces I need to complete the army. So from now on, I have everything and it's all ahead full.

I had to prevent myself from buying three Dreadnought Torso and legs sets from one of the bits sites. I don't have to deal with them for a couple of months (after the event) but got myself all fired up thinking of this conversion (check out the rest of his stuff, it's great).

Right, I've just had a nice dinner, so I'm off to be a couch potato. Catch you later!
Posted by Itkovian at 21:05