Just thought I'd do a quick post to update you on my progress with the first Morlockwing squad. Looking at the pictures now, I realise that I should really have brushed the models off before snapping them... Ho Hum...

The additions to the breastplates were done with a combination of .25mm plasticard and plasticard strips from Antenociti's Workshop. I tried two different methods for filling the gaps - procreate lumps added then sanded off for Mr Claws and a small smattering of plastic glue for Mr Versatile (power sword and s.bolter). They both turned out pretty well. Though Versatile doesn't look like it did in the photo, running your nail across it, it's absolutely smooth... The thunderhammer guy didn't need any gap filling - just sanding.

On to piccies. The squad: 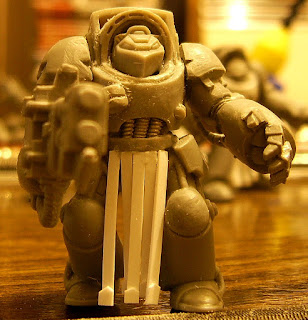 He still needs a groin guard, though I suppose it's useful so you can see how the leather straps were set up. 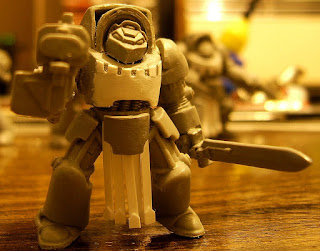 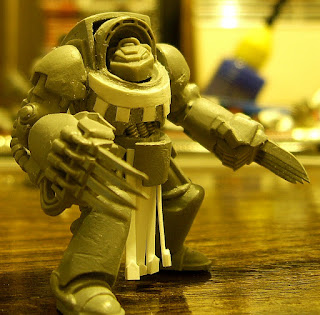 His is the pose I'm happiest with - just got to smooth out the lines (on the greave and lightning claw) for him. Will have to get hold of some fine sandpaper when I get paid. 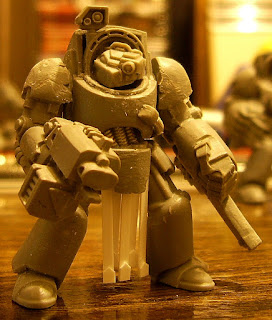 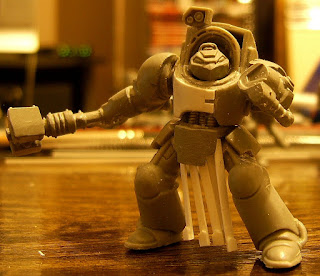 This guy will end up as the standard bearer. I thought that distinction merited a variant helmet. Well not really, I fouled up pn the helmet I was doing for Santar (belial), and that was the best I could make of a poor job.... Didn't turn out too badly. I'll probably need to get hold of some smaller magnets to be able to stick the banner on without gouging too big a hole in him - and the banner pole. I've smoothed down a standard Storm Shield for him and will be printing off a gauntlett-shaped design tomorrow, which I can then transfer to card, apply to the shield then go nuts with procreate and plasticard to come up with a nice custome one for him.

Here are the templates for their collars and shoulderpads. I've cut out the inside of their designs and have stuck them to their third layer of card (the card I have is a bit thin). They're drying at the moment, and I should be able to start getting them done tomorrow. Only another 22 of the sets after this... 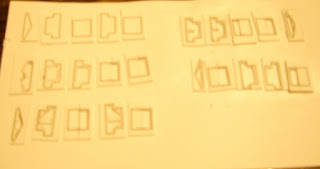