This isn't quite the update I was aiming for: picture taking has been lax recently. Soon-ish though!

Right, on my thoughts this morning (and for a few days now) are the heavier weapons (lascannons and autocannons). Having asked Si over at Pig Iron, it would seem Kolony versions of their Chaingun and Heavy Laser teams are a long way off, so I'm going to be using the Heavy Infantry ones from their "old" range. This will be justified as being a platoon seconded to my company from the regiment's Heavy Weapons Company.

A very good thing about this is the Platoon Pack they do for Heavy Infantry: 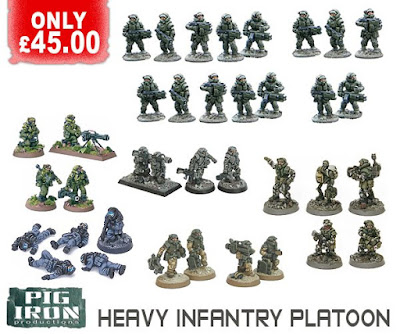 This is the larger of the packs, there's a smaller one for £30 that comes without the 3 Assault Squads at the top of the image.

As it is, this pack gives me:

On top of that, I get five casualties (the kneeling one of which, depending on how he looks when I see him, might be up for conversion) who can be used as makeshift objective markers and nine Heavy Indantry to go towards that three Storm Trooper squads I want to build. Not bad for £45.

After that, I need onlt pay another £42 to end up with two full six-man teams of each heavy weapon (barring heavy bolters).

I think converting and painting that squad for attention has really changed my outlook - I was originally quite adamant about having every single model in a trenchcoat, but my stance has shifted, and will probably keep doing so throughout this project, i suspect.

I bought the Commissar With Bolt Pistol off Ebay the other day, and got it in the post. He is one hell of a chunky so-and-so. He looks ridiculously out of proportion compared to the rest of my guys. I'm considering passing this off as him being gene-bulked in the manner of the Geno Five-Two from Legion, but want to look into alternatives first. Does anyone happen to have a DKOK comissar that they could compare size-wise (in a photo) to a standard guardsman at all? If you could, that would be a great help: I've tried googling it, but the closest I got was a comparison between the Kolony models and a Cadian on Warseer...

Also bought a nice alternative model for an astropath from Heresy Miniatures: The Dark Lord. Thoroughly recommended online store, the models are great, and the service excellent. Though the postage section does give a few days, every time I've ordered from them, I've received my models the next day. With the pilot model from the BFM box set (whom I will need to convert), I have all my Advisors accounted for.

I also bought a pack of the new Kolony Ferals as well as a pack of Rebels, and I'm going to combine them to become a Penal Legion Unit. I'm considering buying more Rebel heads for the Ferals, as I think their original heads are uniquely suited for making Skitarii (Ad-Mech). I'll butcher one up and stick that in the next round of photos, see what you think. ( have a few Men-At-Arms lying around).

Right, I think I'm all news-ed out. Oh wait, remember that BUM-UGLY sofa featured in a couple of my pictures (at least, Drax does, I'm pretty sure). Well that's gone now, I have a spiffy new sofa chair and poof(sp?) suite in a Dark Blue scheme - I am no longer mr Martian Wastes Camo-Pattern... Shame I had to cut a bit off the top of the chair to get it in my place though...

Now I really am out - off to look at all of your blogs. Catch you later!
EDIT:
Thanks for reminding me Klaus. The helmets will be the ones supplied with their open visor greened over. Crating the eye-piece should be easy enough - two balls of greenstuff pressen down in the centre with a styrene rod should do the trick! 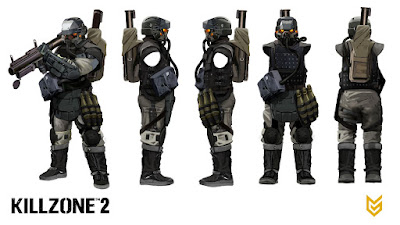