First up, we have a WIP Skitarius (Mechanicum foot trooper). Bits used include a Feral head, Micro Art Studios Iron Brotherhood arm, Phoenix Wargamers Club bionic arm and a Bretonnian Men-at-Arms body, all mounted on a Daemonscape resin base. I've been accumulating stuff in my bits box to make a Mechanicum army for a while now, so it was nice to actually assemble a trooper. I allowed myself to as a reward for highlighting the black on one of my troopers this evening. The putty is still a bit rough, but as you're reading this, it's being cleaned up (it should have cured for long enough once I've finished this post). 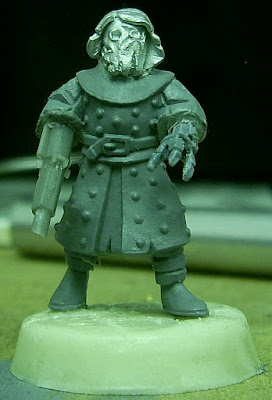 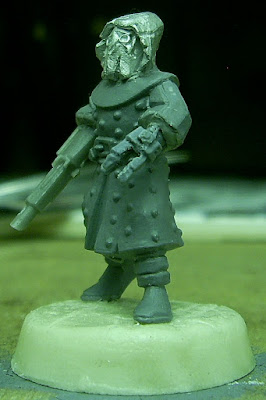 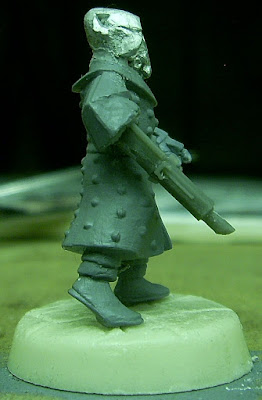 Next up, we have my three company advisors-to-be. While the astropath and master of ordnance don't need any further modelling work, the fleet guy needs the top of his head chopped off, a pig-iron head added and something done about his right hand. Come to think of it, I may look in to giving the astropath a gas mask as well...

Next: two minimum-sized platoon troop choices... (two command squads (though I'm thinking that if I win the Attention! contest, the one on the right will be reassigned), each with two squads behind them - PIPs in the middle.

And lastly, he-who-was-going-to-be-my-captain (sorry about the blacked-out parts, by the way, I realised as I was typing this that I'd be disqualified from the afore-mentioned contest if I showed the pictures unedited...):

Keep in mind that the PI minis on the left are raised by about two or three milimietres. This guy is a beast - he even towers over the standard cadians (with smaller heads, granted, but still...).

Now, should I still go with him (with a suitable head swap) and pass it off as him being gene-bulked, in the manner of the Geno-Two Chilliad, or should I look for another model? I'm considering, the DKOK Commissar from Forgeworld (he is very nice!), but I can't seem to find any pictures online of him standing next to a standard figure...

Anyway, that's me out for tonight. Catch you later!
Posted by Itkovian at 22:11