A little update on the Attention! section - and the rest of the first platoon. I've found it quite useful to have other models around waiting to be painted. If you finish a batch, but still have some wet paint on the palette that won't be used for that run of models, just extend the batch, do as much as you can with that colour on the other models waiting to be started. The way it's shaping up, by the time I've finished this competition section, I'll have most of the 2nd infantry section, 4 heavy weapon teams and the command section for 1st platoon done - bonus!
Anyhow, onto the bit you're actually interested in, visuals:
The whole section:

The rest of the guys: 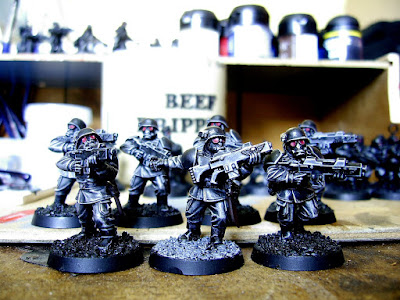 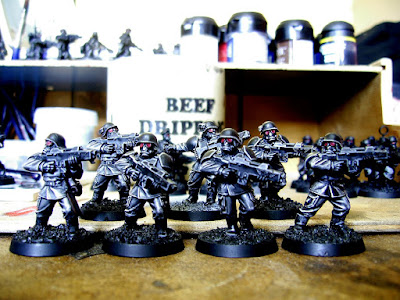 Please note that I having been playing around with the histogram in GIMP (especially the last two pictures), so the colours are a bit off. This is the best representation of what they actually look like (all the other photos were done with the curtains open, so suffered from glare): 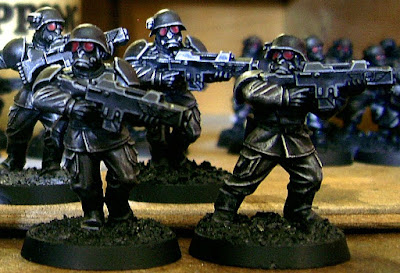 I wasn't sure about the colour of the fatigues to start with, but they've grown on me. Maybe not the most realistic of colours, but I like the style, and they are simple to paint - Codex Grey basecoat, Wash Badab Black, heavy C. Grey drybrush and light Skull white drybrush then 4 or 5 of the washes again to tone them down and make them darker.
Remaining things to do are (a lot of) cleaning up the highlights for the black[Note: If you have consumed most of a bottle of port, do not attempt to paint, especially not extreme highlights...], giving them a couple more black washes then redoing the uppermost edges with Codex Grey again, highlights on the brown pouches, the bases and, of course, the eyepieces.
I want to try out a different approach to the glowing eyes with these guys. If it works out, I'll redo the previous squad too. The first time around, I wasn't too keen on adding orange and yellow to the model - I hate those colours. The problem is, I went back to look at the first section the other day and thought "meh" about the faces in general - instead of piercing bright red eyes, with glow spilling out, it just looks like they've painted their faceplated a really really dark red... It seems literally impossible to get a really bright light-source type red.
I also had a look around at various articles on OSL techniques and got a bit more grounded in the rules you should follow. So the new plan is the basecoat of Red Gore (what's in the picture), which should only be visible in the extreme corners, the Blood Red a bit further in, then yellow (not sure which colour - I hate it that much...), and a tiny dot of white. This will probably be just as long a process as painting the rest of the model in it's entirety, but hopefully, it should pay off. The glow will be toned down as well - that's why the facemasks have been highlighted in grey. There will be a line on the edge of the helmet - the only real place, when you look at the heads properly, where the light will fall - as well as some of the weapons, where the head is close enough to them. Hopefully this will look better.
On a functional/display note, I'm looking into getting myself a three-column template. Hopefully, this won't mess with the existing (few) features of the blog, but if it does, these should be back up and running soon enough (this will likely happen at the weekend).
Cheers!
Posted by Itkovian at 13:11