Morning all, and welcome to another planning session. Today, the subject is the often denigrated glory-boys: Storm Troopers. While seemingly quite expensive, these guys should make a nice addition to my forces. They will of course be airdropped in most of the time, either via Deep Strike or Valkyrie. My goal, once I get the first squad and decide whether I like it enough, will be to have three of these, all mounted in Valkyries, thanks to Wayland Games. I doubt I'll use them all in a normal game, but they'll certainly look more impressive. So, piccies, the idea is simple enough, I'll be using trooper from Pig Irons older range who don't have greatcoats, but have the same, if heavier, armour type: 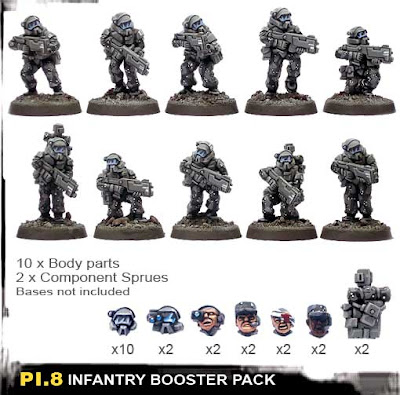 They also have bigger guns than the standard infantry, which fits perfectly.
These are the heads that I'm looking at using: 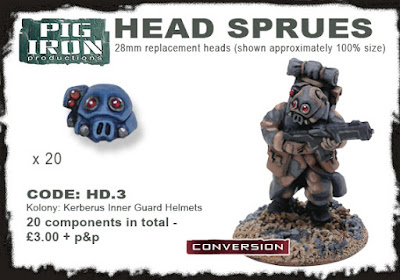 They look nice and heavy - for the whole carapace armour thing. I'm still on the fence as to whether to add grieves and gauntlets though.
There is an interesting pack that they do which includes a support weapon: 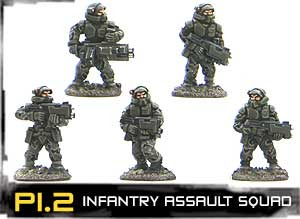 The problem is, I've already used that weapon with my standard boys as a heavy bolter, so it would seem unviable to be used as a plasma gun in anything but the friendliest games, so I'll just keep them with no upgrades, and if I need to remove a tank, I'll just have to use krak grenades... :D
In other news:
Bit of an update on the Assault! section: 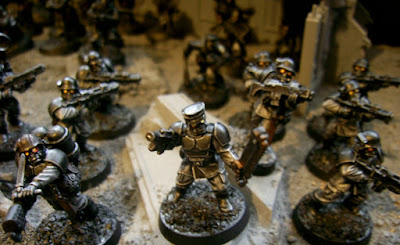 The shot isn't too clear - it's the only one of a mediocre series of shots I took that was presentable, and sadly my camera died before I could take any more. Luckily I get paid before the end of the contest so will be able to grab some batteries before then. I've changed the eyes, and I have to say, while up close, they do look a bit silly, the effect from a foot or so away is very striking, I like it. So much so, that I've already redone the forst section in that style, as well as all the other primed models (some of which you can see in the background). The idea was to set them up on the one piece of assembled terrain I have with the painted squads at the front and primered squads at the back with just the eyes glowing. Hopefully it will work once I get the snapper back up and running.
I finished doing the bases this morning before work, and will be doing the red armbands and metal bits and pieces soon, so there aren't likely to be anymore photos of these guys until they go up on Equinox.
In other news, I've gotten round to drawing out the Leman Russ and Hellhound grav tanks enough to get a good idea of how I'm going to build them, though I'm still working on the chimeras.
Also, as a general appeal, has anyone played the original Ground Control game on PC, and do you happen to have a better screenshot of the Crayven "Hog" Artillery Terradyne:

I would be most grateful if you could send it over to me - I want to use it as a basis for all the artillery units. My email is: adalpheus - at - hotmail.com. Thanks in advance!
Anyway, back to work!
Posted by Itkovian at 09:54